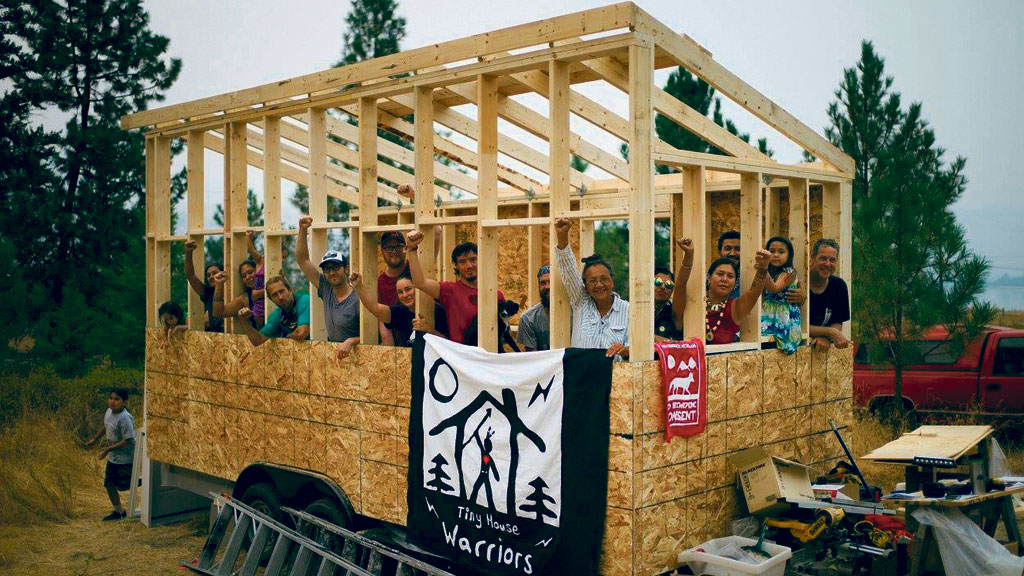 Calling themselves the Tiny House Warriors, a group of Indigenous Secwepemc people from Canada are building tiny houses in the path of the massive Kinder Morgan tar sands oil pipeline's planned route through their territory. The house is a symbol of the home they are fighting to protect, creating hope and community in the face of destruction. | Photo courtesy of Greenpeace

In September, China’s Vice-Minister of Industry and Information technology announced that his country would set a deadline for automakers to end sales of fossil-fuel-powered vehicles. The precise timing is to be determined, but to use that most Canadian of metaphors: we know where the puck is going.

This is bad news for Kinder Morgan, which has pitched its Kinder Morgan Trans Mountain Expansion pipeline as a way to reach the rapidly growing Chinese market and has publicly admitted that without a growing demand for oil, its pipeline could be a money-loser.

That admission came in response to Greenpeace Canada’s challenge to Kinder Morgan’s draft prospectus (the legal document underlying the $1.75 billion share offering in Kinder Morgan Canada that would finance its proposed new tar sands pipeline). We challenged it on the grounds that it contained inadequate disclosure of climate change-related risks and over-estimated the growth in global oil demand, and in particular, Chinese oil demand.

To make the case for rising demand in India and China, the prospectus cited the Canadian Association of Petroleum Producers’ (CAPP) 2016 Crude Oil Forecast, Markets and Transportation, which in turn cites the International Energy Agency’s (IEA) New Policies Scenario. Yet the figures provided in the CAPP report differ markedly from those issued by the China National Petroleum Corporation Economics & Technology Research Institute (CNPC), which is the in-house research arm of the state-owned oil company responsible for informing long-term strategy development. 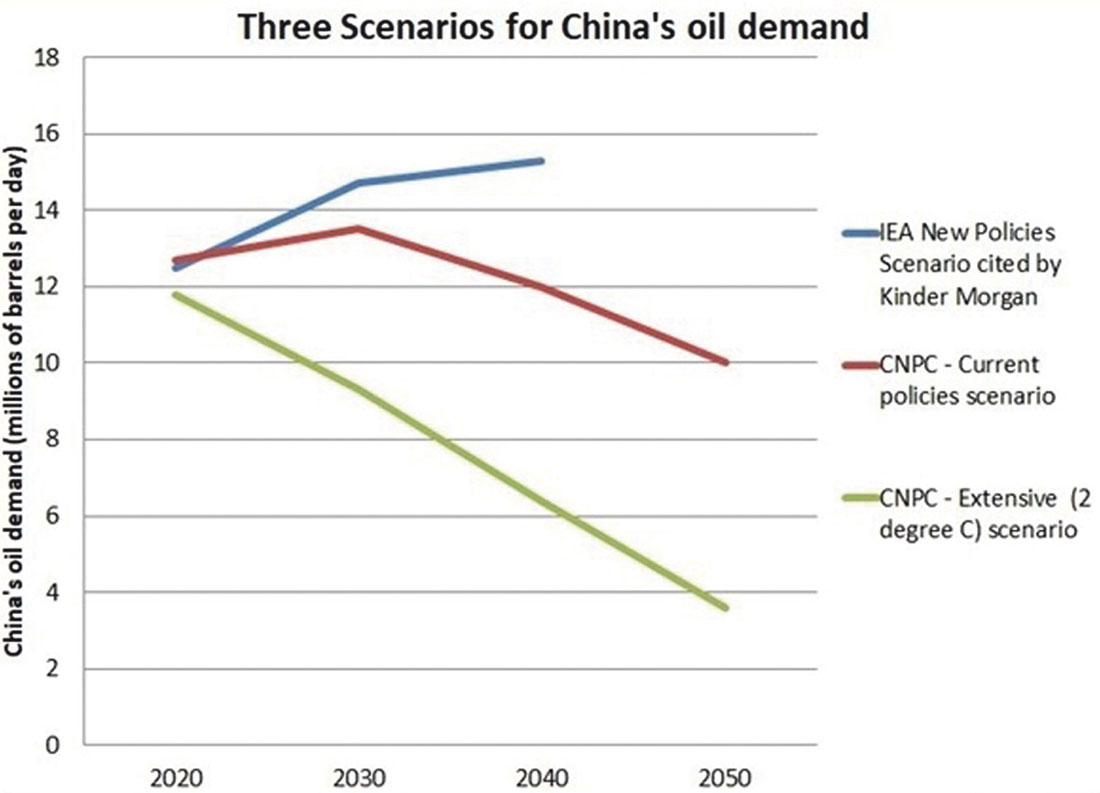 The CNPC’s 2016 report entitled 2050 World and China Energy Outlook is considered to be the most up-to-date and authoritative source on oil demand projections produced in China. The CNPC’s “current policies” scenario has a much lower forecast for increased oil demand than in the CAPP/IEA forecast (see graph below). Even so, the current policies scenario assumed that ownership of electric vehicles would account for a modest 1.3 per cent of total vehicle ownership in China in 2030, rising to 4.5 per cent in 2040 and 11 per cent in 2050.

September’s announcement indicates that the Chinese government is considering forcing significantly higher rates of electric vehicle adoption. This would not only lower future Chinese oil demand (more in line with the CNPC 2 degree scenario in the graph opposite), but likely tilt the global marketplace in favour of electric vehicles. It is worth noting that India is also contemplating an all-electric policy by 2030.

Following Greenpeace’s challenge, Kinder Morgan modified their prospectus to acknowledge the possibility of lower oil demand. With market momentum firmly behind a rapid transition to an electrified transportation system powered by renewable energy, investors should be asking why Kinder Morgan is still pursuing the Trans Mountain Expansion pipeline.

From flotillas to lawyers, the opposition lines up

Oh yes, and the official opposition of the cities of Vancouver and Burnaby and the NDP/Green government of BC. Not to mention the Union of BC Indian Chiefs and 13 First Nations actively opposed to the pipeline expansion. And thousands of activists who have been pledging to do “whatever it takes” to stop the project.

Then there’s the anti-spawning mats the company placed in streams in October but has been ordered to remove, and the long-suffering endangered orca in the tanker-threatened waters. And the market forces which led to cancellation of the Energy East project from Alberta to New Brunswick.

The Secwepemc Tiny House Warriors are “going big by going small,” and building 10 tiny houses along the pipeline route to assert Secwepemc law and jurisdiction, re-establish village sites, and block access to the pipeline.

The opposition is multi-layered and rests on several points of contention, from tripling the capacity of the tank farm below Simon Fraser University (over the objections of the Burnaby Fire Department) to the increase in oil tankers plying the Salish Sea, from five a month to 34. The current 60-year-old line carries 300,000 barrels of diluted bitumen and other oils a day from Alberta but twinning the line would increase the volume to 890,000 barrels.

The Secwepemc Tiny House Warriors, whose motto is “Our Land is Home,” are “going big by going small,” and building 10 tiny houses along the pipeline route to assert Secwepemc law and jurisdiction, re-establish village sites, and block access to the pipeline.

The weighty contentions now in court centre around First Nations consultation and other flawed and unfair processes. In October, the Federal Court of Appeal heard oral arguments on 15 consolidated challenges to the federal approvals of the Kinder Morgan Trans Mountain pipeline and tanker project. The case has the potential to overturn the NEB and federal Cabinet decisions as happened with Northern Gateway.

Elin Sigurdson, counsel for Upper Nicola Band, kicked off the hearing: “The Kinder Morgan Project risks destruction of ecosystems and harm to the environment, threatens endangered species, endangers human health, and threatens the Aboriginal rights, title and reserve interests of numerous First Nations…. As you will hear from the Applicants, the process for approval of the Project, which resulted in the decisions before this Court, was legally deficient in numerous ways.”

Keith Stewart is an energy campaigner for Greenpeace Canada. The first part of this article was originally published at www.greenpeace.org.