People from around Earl Grey, Sask., took part in a public meeting Thursday to discuss a proposed Chinese-owned potash mine in the area. 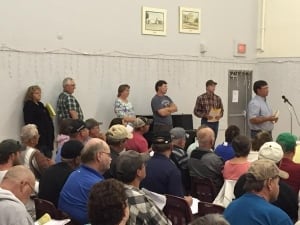 People at the community hall in Earl Grey, Sask., line up to pose questions during a public meeting to discuss a proposed potash mine in the area. (Ryan Pilon/CBC)

Yancoal Canada, which operates coal mines in China and Australia, is proposing a potash mine with an annual output of 2.8 million tonnes near the communities of Earl Grey, Southey and Strasbourg.

Prior to the meeting, local resident Cathi Beckel said she has concerns about the project, noting there are too many risks — including water security issues and a boom and bust job situation — with too few benefits.