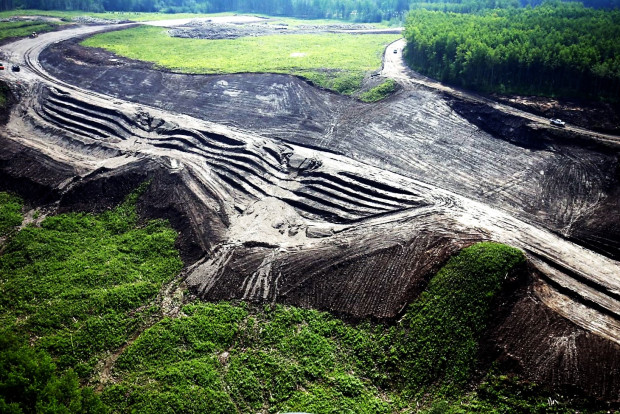 In September 2009, Klohn Crippen Berger Ltd. and SNC-Lavalin Inc. made the following statement: “The uncertainties in predicting both the extent and rate of the reservoir shoreline impacts lead to the proposal to adopt an observational approach for periodically reviewing and updating the reservoir impact lines after the reservoir has been filled.” (Peace River – Site C Hydro Project Reservoir Shoreline Impacts Methodology and Criteria Report No. P05032A02-10-001, p. 9.)

This factor should have stopped the project instantly.

Instead the decision has been made to build a dam in sedimentary shales surrounded by slippery clays. The shales were mud some 70 million years ago. When you add water and exposure of the shale to air, this supposed bedrock returns to mud. On top of it all, the reservoir is surrounded by Montmorillonite clay soils which will slide when wet.

In a recent report to the BC Utilities Commission, BC Hydro acknowledges “unexpected” geotechnical problems. These include unexpected slope failure on the project’s north bank, larger than expected deterioration of shale bedrock exposed during construction, and a phenomenon called rock-exposed swell.

These factors and the professional opinions employed by BC Hydro need to be examined in detail regarding the safety of human activities surrounding and within the proposed reservoir. There has been no outside examination of these factors. It has not been addressed as of the writing of this commentary.

This outstanding safety concern is further reinforced by the report commissioned by the Honorable Jack Weisgerber, Minister of Energy, Mines and Petroleum Resources in 1991. Prepared by the Geological Survey Branch of British Columbia, this report was made without reference to the proposed flooding of the Lower Peace River Valley; rather it was commissioned to examine aggregate exploitation within the lower Peace River region. It urged caution: “Valley slopes throughout the region are subject to slope failure and colluviation, and the development of these sites should be minimized.” (Quaternary Geology and Landforms of Eastern Peace River Region, British Columbia, by N.R. Catto 1991).

The taxpayers are unintentionally paying for the largest environmental and economic catastrophe of BC’s 21st century.

Photo above: This is the “Bedrock” that the proposed Site C dam is to be built in. It is a Shaftbury shale which was mud some 70 million years ago. A rainfall event of some 2 inches in a half hour on July 20, 2016 caused some of this slope failure. The Montmorillonite clay soils overlaying the shale are even more unstable under wet conditions. Photo courtesy of Don Hoffman.