Kiʔlawnaʔ, grizzly bear has been a powerful figure since the beginning of time. With only an estimated six bears left in the Northern Cascades, the Okanagan Nation Alliance (ONA) has been working on recovery, but the colonial border draws its invisible line, impacting the comprehensive recovery initiative.

Chief Clarence Louie, ONA Tribal Chair explains, “the boundaries created by the US and Canada, are not recognized by kiʔlawnaʔ.”

The eight-member Nation alliance wants the US Department of Interior to immediately reinstate recovery planning for kiʔlawnaʔ in the US portion of the region. Doing this would “maximize the viability of a future grizzly bear population throughout the North Cascades,” explains ONA’s press release.

ONA is collectively urging the US Secretary of Interior, Deb Haaland, “to act immediately and relaunch the recovery planning process on the US side of syilx and kiʔlawnaʔ territory.” This process was stalled under the previous US Administration since 2016. However, the Okanagan Nation Alliance is hopeful that the Biden administration will revive the process.

A collaborative initiative between ONA, researchers, and conservationists is seeking to track numbers of kiʔlawnaʔ, monitor populations, restore habitat, and understand the original scope and accurately map how large their territory was – and should be. Taking the lead from Indigenous science is what makes this project especially insightful.

“The project’s hope is that we blur or erase those colonial borders, because they’re just not consistent with, nor do they recognize a need for ecological or cultural connectedness – they’re artificial,” says Joe Scott, Conservation Northwest’s International Programs Director.

The syilx* Okanagan territory was once home to a thriving population of kiʔlawnaʔ. Today they are sometimes said to be extirpated from the area – meaning no longer existing in this territory. On the edge of extirpation simply means that there are still a number of them, but they’re so low that there’s no way of rescuing that population. Describing them in this way means they don’t receive endangered status – since they are already assumed to be gone.

“The postage stamp approach to looking after the landscape or to conservation does not work. Indigenous science and knowledge, and complex systems can teach us.”

How a species’ status is designated is important. For example, “endangered” means there are a number of opportunities to support the population – by protection or by recovery measures. The BC Conservation Data Centre ranks grizzly bears as S3 (Vulnerable) in BC, because they are looking at the provincial numbers, with larger populations of grizzlies in the north included. At the federal level, they are all seen as one population, and designated as threatened.

The Chiefs of the Okanagan Nation Alliance declare grizzlies in syilx Territory to be at-risk and in need of protection. First Nations are not giving up on kiʔlawnaʔ and are working hard to help recovery.

For the syilx people, kiʔlawnaʔ (grizzly bear) is a significant part of oral history, laws, and protocols. Kiʔlawnaʔ is a powerful figure in stories – reminding of responsibilities to their land.

kiʔlawnaʔ has been an integral and critical part of syilx culture since time immemorial,” says Grand Chief Stewart Phillip. “Its presence in syilx Territory is an indicator of the health of syilx land and people. We will work to build the supportive relationships needed ensure that kiʔlawnaʔ will remain and thrive in its natural environment.“

The grizzly bear is a relative who guides them in the ways of living in respect to the land and all living things – tmixw. This is a term with huge meaning, it’s not just “land” –  Dr. Jeannette Armstrong defines it as “all living things.” She is associate professor of Indigenous Studies, and a Canada Research Chair (CRC) in Indigenous Knowledge and Philosophy. Skayu Louis is a sylix scholar who speaks of the need to create Indigenous institutions for conservation that move beyond the boundaries of our funding structures. He shares more on tmixw, “within the word is the image of a spiral, the agency of life, and the connective tissues of life.” This knowledge supports the interactions, interconnectedness, and interdependencies of all living things – for the best chance at survival.

Ellen Simpson is a PhD candidate of mixed Cree heritage who is beginning her research centering sylix ecological knowledge. She’s working to obtain a better picture of pre-1900 evidence of the forested land base. “I’m trying to capture a precolonial state of the forest,” she explains, “before that explosive forestry in British Columbia.” She’s beginning with mapping projects that engage syilx community members. Simpson takes care in combining the words: map, engagement, and collaboration. “To many people, it’s a traumatic event because maps have been so destructive to a lot of the lands that are of the unceded, traditional territories of many of our Indigenous people, globally.” Decision-making in BC is informed by settler science, a Western science worldview, including past and future forest modelling. “There’s a complete lack of a holistic approach that is foundational to Indigenous sciences and complexity sciences. The postage stamp approach to looking after the landscape or to conservation does not work. Indigenous science and knowledge, and complex systems can teach us.”

One of her supervisors is Knowledge Keeper Dr. Jeannette Armstrong, UBC Okanagan professor. Armstrong sits on the Aboriginal Traditional Knowledge subcommittee with COSEWIC. The Committee on the Status of Endangered Wildlife in Canada is an independent committee of wildlife experts and scientists that works to identify species at risk and designates their conservation status. Part of that work includes reaching out to First Nations for their Traditional Knowledge relating to species’ biology, habitat, reproduction, and threats. “We want to make sure that the Indigenous knowledge is driving how they make decisions related to status,” says Armstong.

“What we’re doing is improving on the limitations of Western science methods,” Armstrong explains. “Collaborating with Western science to improve science overall, in terms of our species and what our responsibilities are as human beings.”

Traditional Knowledge is needed to inform science, such as sylix hunters knowing exactly where to collect hair samples. Armstrong shares an example of how Traditional Knowledge has a clear understanding of the difference between how the foods that are used by the Okanagan grizzly bear are different from those in other areas of the province. “For instance, you have all these grizzly bears that don’t know how to catch salmon because our salmon have been endangered in the Columbia or taken totally out of the upper Columbia river. The grizzly bear on the Grand Coulee side, which is part of the Okanagan, don’t have access to the salmon because of the Grand Coulee dam,” says Armstrong.

“Our responsibility as sylix people is to make sure that we inform the science, we inform the policies, and where we can, we push the agenda so that we can change the way that science is done,” Armstrong explains.

Armstong is clear, they are not asking science to validate what they know. “It’s a way to improve science with sylix science,” she says. “Knowledge about our land and everything on our land is science. It’s not just hearsay or anecdotes. It is science. “So what we’re doing is improving on the limitations of Western science methods,” Armstrong explains. “Collaborating with Western science to improve science overall, in terms of our species and what our responsibilities are as human beings.”

The North Cascades region spans both sides of the US-Canada border. The transboundary area in Southwest BC and Northwest Washington is the southern fringe of grizzly bear presence in North America. Grizzlies once roamed as far east as the plains of the Mississippi River, north to the shores of the Arctic Ocean, and south to the highlands of Mexico, according to the Coast to Cascades Grizzly Bear Initiative.

Grizzlies are threatened by an excessive open backcountry roads network – which gives poachers access. Those roads and utility corridors accumulate in major valley bottoms, making it difficult for bears to move through unharmed. In addition to livestock grazing and farming, it’s important to include the infrastructure attached to energy development, mining, forestry, and recreation. With their range disrupted, grizzlies become isolated and this impacts gene pools. There is strong evidence of this genetic fragmentation in the southern parts of Kiʔlawnaʔ’s range. 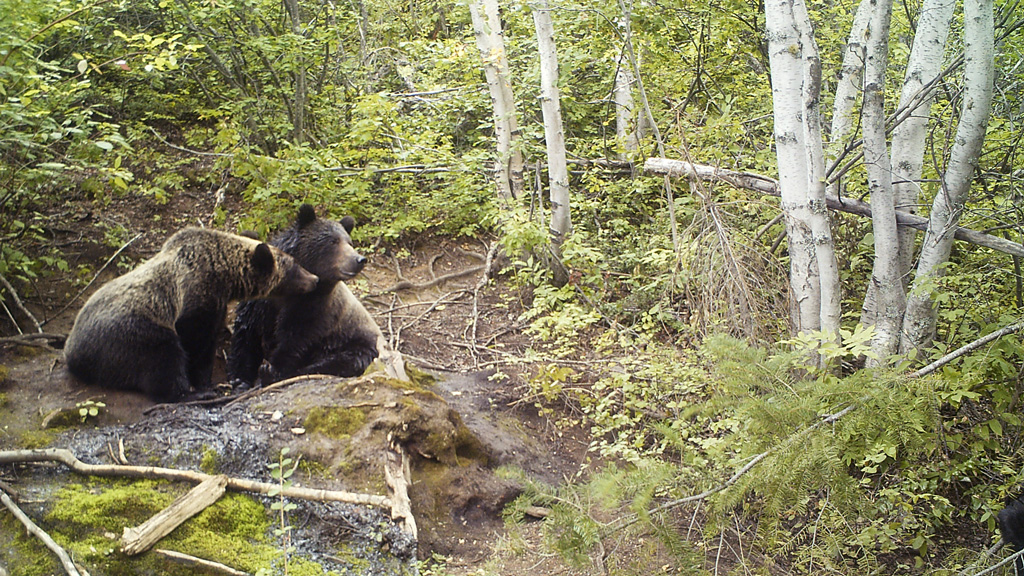 Mother and two year old cub seek relief in a water hole, cooling off in an area where temperatures can rise to 40 degrees. | Photo credit Dr. Michelle McLellan.

The Okanagan Nations are making a case for a different status listing, based on “island populations” of grizzly bears that don’t have corridors to bring in different DNA from the other mountain ranges. ONA has identified the number of island populations that do exist and “all of them exist in lands directly associated with our reserves,” says Armstrong.

ONA has hosted collaborations with agencies such as Conservation Northwest as part of a joint nation recovery initiative. Scott explains, “We support and work with First Nations who are themselves split by those colonial borders, which added to the erosion of their culture and families, similar to the way it eroded our ecologies.”

The ecological systems dictate the need to work together to solve our shared problems. Scott describes it as “stitching habitat and species pieces back together. In the past, we’ve operated in our silos, as NGOs try to get areas protected, lobby the government and put pressure on the industry.”

Jeannette Armstrong has written about another nsyilxcən word, xaxaʔ (Armstrong, Cardinal 2012), which refers to the meaningful essence of all creation. This word is applied to humans, as being with the power to acknowledge or act in ways which seek to maintain the principle of harmony with creation and yet continue to make new choices for survival.

First Nations are trying to maintain the habitats that sustain their livelihoods, while overcoming the subjugation of governments and colonialism. Scott says the collaboration is “essentially trying to navigate the things that have separated us in the past, because we want the same things. Most of us in the NGO communities, we want sustainable hunting and fishing and subsistence relationships to the land. We want and we support Indigenous title and rights. We want to see Indigenous peoples managing the land the way they did – before colonial people came and screwed everything up.”

The collaborative work between ONA, researchers, and conservationists is forging a new way to restore health and home to kiʔlawnaʔ. “How ignorant, if we don’t have kiʔlawnaʔ in this area when we have a whole city named after it?” asks Armstrong.

*Author’s note: the small “s” in syilx is deliberate – what I have learned is that it is more accurate from a cultural perspective.

Odette Auger, Sagamok Anishnawbek, is a guest on Klahoose, Homalco, Tla’amin territories. Her journalism can be found at Watershed Sentinel, IndigiNews, APTN, and the Toronto Star, among other places.