The humble bean has never been much appreciated as a food crop in British Columbia.

When I say beans, I mean the pulses that have edible seeds in pods, most notably chickpeas, favas, and lentils, as well as dry peas and beans.

There are good reasons for British Columbians to get serious about them.

We can no longer rely on our oceans and rivers as sources of quality protein. As readers of the Watershed Sentinel well know, fisheries management is a disaster, waters are polluted, and stocks are depleting to the point of extinction. Based on over three decades experience in bean growing, I can say that they are our best alternative.

Beans have been a key food in temperate climates around the world for over 8000 years. They are rich in protein, fibre, and complex carbohydrates, and contain an impressive variety of vitamins and minerals. Beans are recommended for heart health, diabetes, and weight control and are an excellent mainstay for vegetarian, vegan, and gluten-free diets.

Countries around the world enjoy the diverse variety of pulses prepared in myriad ways. Surprisingly, it’s Canadian beans that are often eaten in areas such as the Middle East, Southeast Asia, and India. In fact, our country is the world’s largest exporter of pulses.

Domestically, Canadians consume less than five per cent of the dried peas, beans, chickpeas, favas, and lentils that are grown on the Prairies. The beans found in our own supermarkets are almost always imported. These are usually old and dried out.

We tend to think of them as inferior foods that are hard to digest, but the truth is that if you cook dry beans within a year of their harvest, they absorb water better, cook up quickly, and are much easier on the digestive tract than the ones you are used to.

If we are ever to break the hold the banksters have on us, we need to move beyond a monetary measure for the value for food

As legumes, they increase soil fertility by taking nitrogen out of the air and putting it in the ground. They do this in association with soil organisms on their roots. Pull a plant out of the ground, and you can easily observe the root nodules where nitrogen fixing takes place. I have often grown pulses in the same place for two and three years, with increased yields the second year and even more so the third year.

Beans are drought resistant, and can be grown without herbicides and pesticides, as millions of small-scale farmers do worldwide. I have been doing so myself for over 30 years.

If planted in May, when there is still moisture in the soil, beans can be mulched to keep moisture from evaporating and to prevent weed competition. Then, no care is required until harvest. Last May, I planted at Ruckle Park on Salt Spring Island, with the intention of bulking up bean varieties for larger plantings. It took six of us only a few hours to plant the beans. They grew quickly, soon shaded out the rows and the weeds, and didn’t need further work until harvesting in September. We obtained over 150 pounds of dry beans from eighteen 70-foot rows.

In my recent book, Changing the Climate with the Seeds We Sow, I cover how food is rarely mentioned in climate change discussions – and especially not by politicians. Yet a strong case can be made that the unsustainable way we grow, transport, process, and consume food in North America is contributing to climate disaster.

We work most of our lives so we can have “food on the table.” If we are ever to break the hold the banksters have on us, we need to move beyond a monetary measure for the value for food. In truth, we need to bust out of the current arrangement that is destroying the earth very quickly. It is crazy that people whose hands never touch the earth profit from industrial agriculture, and equally crazy that we ship crops thousands of miles across the globe, while those same crops are transported thousands of miles to us.

Indigenous Peoples thrived without buying and selling food. If we are to take better care of ourselves and the planet, there’s no better or easier starting place than growing our own food communally instead of buying it as individuals. Well, maybe not easy considering the mindset that makes money the reason for everything. But certainly, it shouldn’t be hard to turn over some soil and plant food with friends and neighbours.

There is so much suitable land around that is just growing grass.

School gardens are sprouting everywhere these days, so why not make them large enough to grow significant amounts of food, to become, in essence, community mini-farms? Perennial fruits, berries, nuts, and annuals could all be planted and become free food sources for years to come. Kids could bring home snacks for their parents!

What is the most likely scenario in the years to come? For sure there will be more climate-related floods, fires, windstorms, and temperature extremes. It will become increasingly difficult and expensive to maintain roads, bridges, ferry docks, and power grids. All these things will erode food security.

If we make food production a community endeavour and learn how to take care of ourselves where we are, we will increase our ability to weather the impacts of a changing climate, as well as our prospects for still having a good life.

Dan Jason is the author of Watershed Sentinel Books‘ latest release, Changing the Climate with the Seeds We Sow.

A passionate gardener since he planted his first backyard in Montreal at age 13, Dan is committed to empowering people to grow their own food and save their own seed. Since 1976 he has lived on Salt Spring Island, BC, where he created the mail order seed company Salt Spring Seeds, which specializes in heritage and heirloom open-pollinated and non-GMO seed varieties of vegetables and plants.

Dan was strongly involved in Seeds of Diversity Canada in its early years, and founded the Seed and Plant Sanctuary for Canada in 2003, which he now heads. 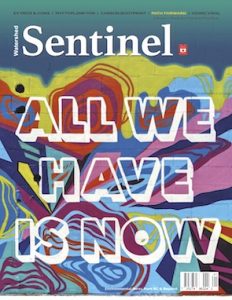 This article appears in our February-March 2020 issue.