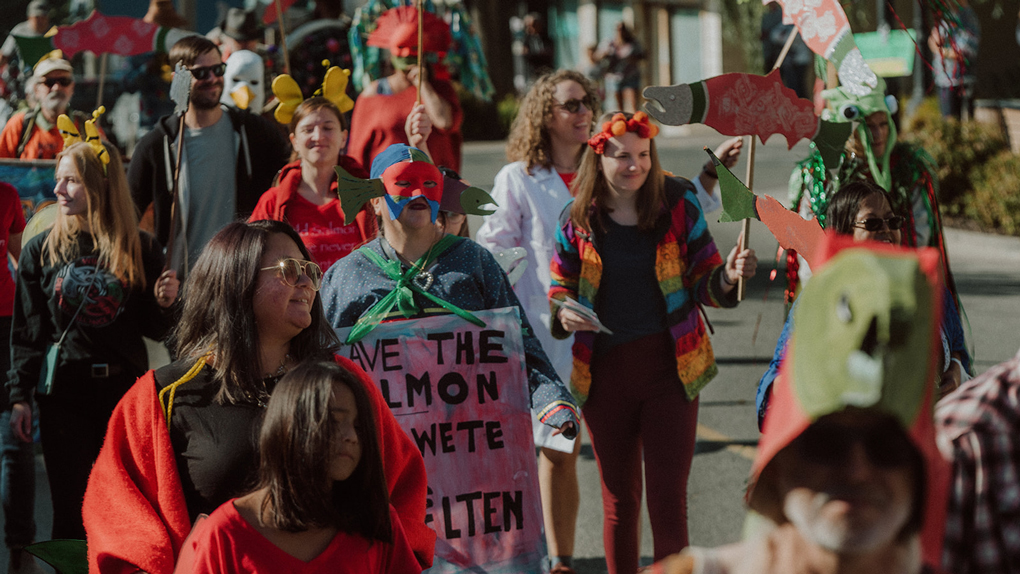 Demonstrations of love, honour and respect drifted through the air on October 2, 2022, in Chase, BC, as participants in the Wild Salmon Caravan came together in ceremony, celebration, and prayer. The annual event aims to “transform the darkness surrounding the industrial storm killing wild salmon,” according to founder and curator Dawn Morrison, and to “raise awareness of the important role Indigenous Peoples play in wild salmon conservation…. We shine a light on it through the arts and the culture and bringing colour, and music, and appreciating the beauty in the world.”

Participants were in high spirits despite the salmon’s late arrival. The salmon were believed to be waiting in deeper watersheds for water temperatures to cool before completing their journey. The highest recorded return was roughly 3.8 million in 2010, down to less than 600,000 in 2018. Irregular weather events, habitat destruction and industries such as fish farms, hydroelectricity, and logging are suspected of contributing to decreasing returns. The return is still in progress; however the numbers are expected to follow the pattern of decreased returns to the Fraser watershed.

The celebration kicked off with a parade led by Secwépemc drummers and singers, followed by chants and signs for salmon protection, ending in a marching band. The energy was carried to Chase Provincial Park, where the ceremony opened with a prayer, followed by the Secwépemc Welcome and Salmon Song. The audience was invited to join the dancers in the Salmon Dance to show gratitude and respect for the salmon. 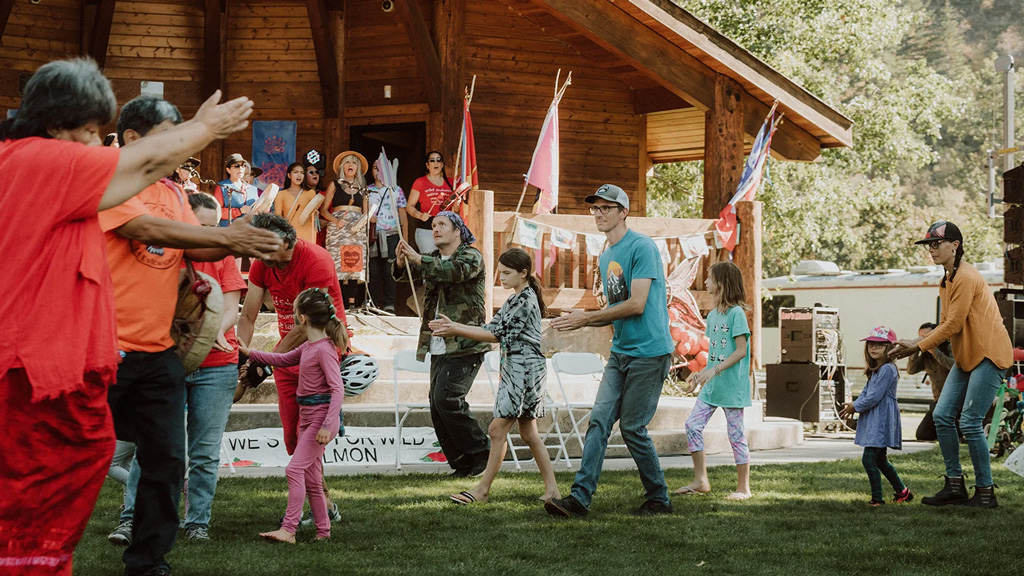 The ceremony continued with a speech by elder Mike Arnouse, who shared the wisdom passed down to him – salmon are more than just food; they are teachers. “We honour the salmon for all the things it has done for thousands of years – not only for humans, but for the eagles, the bears and the hawks. All the things that it feeds on its way through.”

“We are putting an offering down for the salmon, the people that have come here to honour the salmon, respect the salmon, and to help the salmon,” said elder Flora Sampson, proudly holding up a locally harvested plate of food. She urged younger generations to “come to the elders and learn how they grew up with our language, our tradition, our values.” Additional Secwépemc songs and prayers were shared before everyone was invited to feast.

Morrison, founder of the Working Group on Indigenous Food Sovereignty (WGIFS), took the stage as a proud member of the Secwépemc community. She shared the history behind the people and territories carefully selected to provide the celebration’s pastries, vegetables, fruit, salmon and bison. She reminded the crowd to cherish everything provided by mother earth. “We just want to honour the food, that’s what it’s all about. Food sovereignty.” Morrison continued to remind the attendees, “it’s not enough just to eat and enjoy that salmon. It means showing up to the front lines, it means celebrating them, and doing the ceremony – being thankful and taking care of the remains of the salmon.” 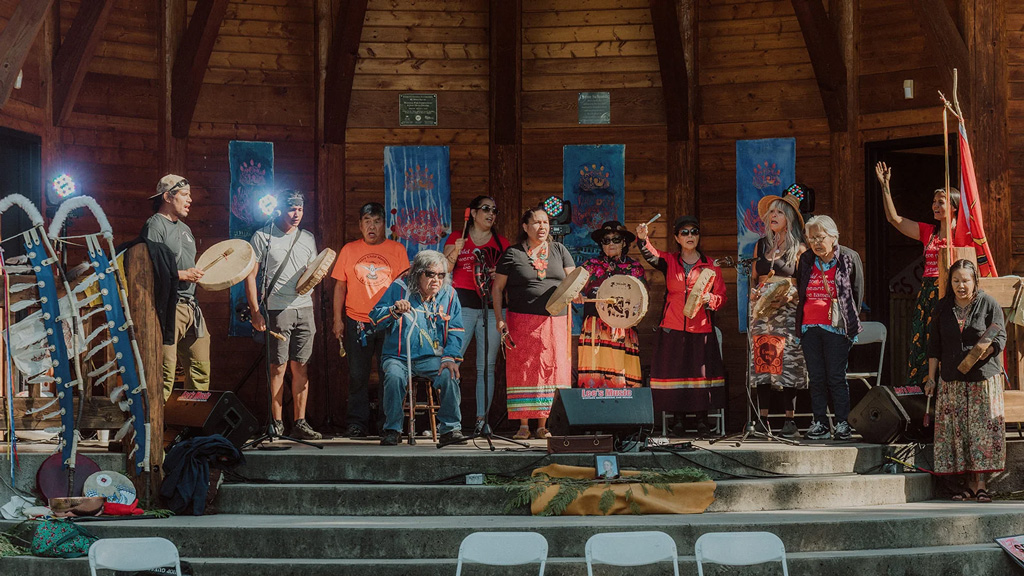 “We’re here today to call them home because they do hear our songs,” Morrison began. “It’s a really beautiful thing when we go to the river and sing, we know, and we see the salmon – they actually come in big pools. They’ve been hearing us sing these songs for thousands of years.” All day and into the night, passionate defenders of salmon sent their sound waves to the fish, still making their way to the local watersheds.

In an interview with Watershed Sentinel, Caravan storyteller and elder Johnny Jules laughs, reminiscing about his father’s “homemade Buckley’s,” made from boiled preserved salmon heads, onions, and whatever vegetables were on hand. He shares a story about Salmon and Coyote: “Years ago, no salmon were coming up the river because of the blockage up the Fraser river. People were hungry, waiting and waiting. No salmon came up. Coyote comes along and says, ‘I will help you, people; I’ll go down the river and look what is blocking the fish.’” Jules explains that Coyote travelled the Thompson and Fraser river, discovering two men guarding a dam. “So, he turned himself into a stick and goes to the dam, and at night while the guards slept, he destroyed the dam. The salmon escaped and returned to the river, and the people got to eat. So today, when we catch the first salmon, we lift it up into the air. We give Mother Earth thanks, and we lift it up and thank Creator for the wonderful gift that it made us.”

Cwelcwelt Kuc – we are well

Every speech, beat on the drum, and song sung served as a reminder of each individual community member’s power in the fight for food sovereignty and environmental protection. Some proactive initiatives highlighted at the event included: the Cwelcwelt Kuc “We are Well” Garden, the Indigenous Working Group on Food Sovereignty, and the Upper Adams Lake Salmon Restoration Project. Special regard was given to the elders dedicating countless hours to sharing and preserving their language, culture, and teachings.

Morrison identifies to Watershed Sentinel some of the issues her team and fellow defenders are fighting: climate change, colonialism, corporate control of the land and the food system, contamination of the water, and deforestation. “Truth and reconciliation is supported through action, not words – and that’s what we’re trying to support here.”